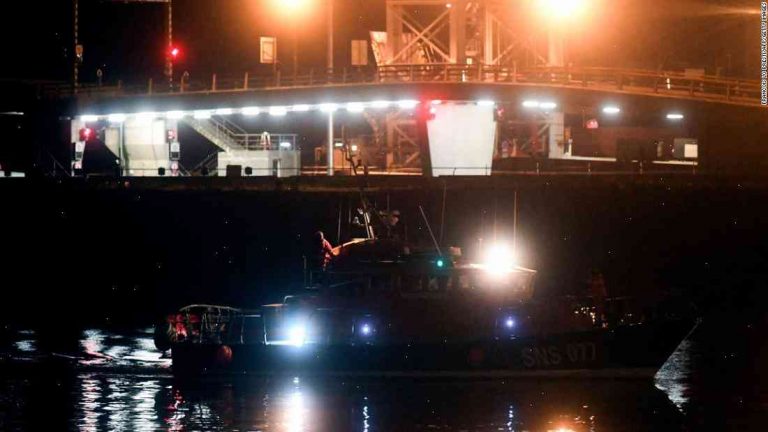 This article is over 3 months old

At least 27 people died after a wooden boat carrying 30 migrants capsized off the coast of France, navy officials said.

‘We’re not even alive’: how drownings on the Med inspired children’s books Read more

Rescuers and divers were searching for the survivors on Thursday, as authorities in mainland France lowered the flag on the port city of Marseille as a sign of mourning to pay tribute to the victims of the incident.

France 24 said survivors had brought them to a harbour in Marseille and transferred them to an ambulance.

The navy said the capsized boat, a wooden inflatable, had been travelling east towards France from Libya at about midday on Wednesday.

“An air and sea search was launched immediately. The rescue operation is ongoing,” the navy said in a statement.

The mayor of Marseille, Yohan Lalanne, who lowered the city’s flag, said “the number of victims is, for now, at 27, but it could rise”.

Four people had been rescued from the water and nine, including a baby and a disabled man, were admitted to hospital.

The UN refugee agency UNHCR has said that last year up to 280 people died trying to reach Europe on inflatable boats and other vessels.

The Italian coastguard said on Thursday that 76 migrants were rescued from two separate boats in the Mediterranean overnight.

Since 2015, some 450,000 people have arrived in Italy by sea, some of them intercepted and taken to detention centres by the Italian navy, the UN refugee agency said on Wednesday.

Refugees now risk crossing the Mediterranean from Libya, a move which has prompted the UN to renew calls for relocation programmes among the EU’s 28 member states.

The relocations can also mean the passage of some refugees as far as Scandinavia and Poland.

Monaco Grand Prix to revert to three-day format in 2022