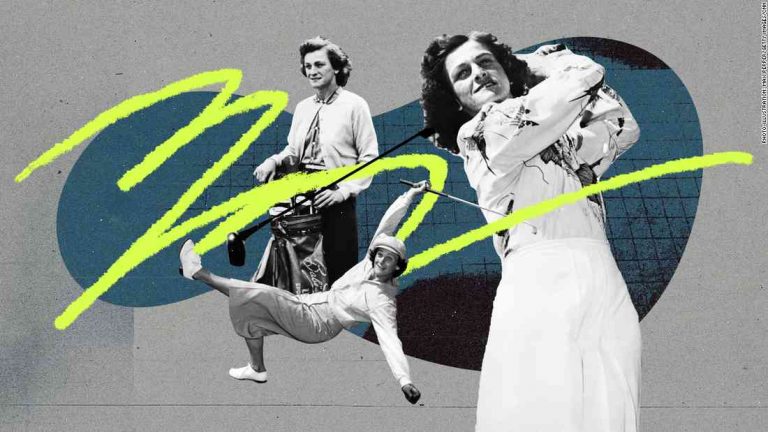 Pauline Payette, the first woman to qualify for professional golf’s major championships, has died at the age of 81.

The American died suddenly in Denver in the US.

Born in Victoria, Canada, in 1935, she qualified for the Women’s Australian Open in 1975 but could not play because of a pinched nerve in her neck.

She failed to qualify for the Masters in 1979 because she had lost her Australian visa – the only time a player did not make the cut.

“She was quite a marvel to watch on the golf course and I truly wish I had been able to challenge her in a match.”

As a player in Australia, America and internationally, her most significant achievement was the Los Angeles Women’s Open, which was held in 1977 when she was 16 years old.

It took place in the Southern California desert, where golf’s tours were changing.

The US was introduced to its first women’s professional golf tour three years earlier in 1972, the Women’s British Open in 1973 and the Ladies Australasian Open in 1974.

Pauline was among the tournament favourites.

“It was quite an event and I was thrilled to be the youngest player in the field,” she said.

“I was living in Miami when the tour was set up and only a few years later, I moved to the States.

“I started playing a year after Los Angeles and it was only as I grew older that I realised how significant the event had been and how special I had been to be part of it.”

She failed to qualify for the 1979 Masters but participated in a Celebrity Invitational in which she partnered Arnold Palmer at the Royal Birkdale course.

She turned professional the following year and competed in the North American tour from 1972 to 1982.

She won 27 tournaments in that time and amassed $1.8m in prize money, the second-highest total in LPGA history.

In 1979, she moved to Canada with her American husband, Bill Way, to attend Alberta College of Art and Design in Calgary.

After retiring from golf in 1984, she became the University of Calgary’s head equestrian coach for 14 years and also ran her own travel business for 33 years.

In 1983, she and her husband, who had joined the Canadian Country Club in Calgary, competed in the Countrywoman-Elephant competition as a duo – as a horse and rider.

In 1992, she became the first female member of the University of Calgary board of governors and she served in that position until her retirement in 2000.

Her father, James Payette, was an amateur baseball pitcher and played semi-professionally with the New York Yankees from 1943-45.

Pauline is survived by her husband, Bill, her daughters Sandra and Amanda, her stepdaughter Natalie Aulich and her sisters Joanne, Myron and Linda.